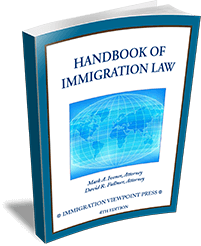 Books by Mark A. Ivener

His books on immigration topics include: